If you don't give a hoot about COMPMNGR's history, click here to jump directly to long term plans.

COMPMNGR was developed by Richard E. Douglass, who is usually called Dick and occasionally worse than that. He was given moral and administrative support by his wife and dance partner, Elizabeth S. Douglass. Dick was awarded a Ph.D. in Mechanical Engineering from the University of Texas in 1967, when engineers were in the process of switching from slide rules to computers. Since then he has been as much a computer programmer as an engineer. Elizabeth has worked mostly in office administration, mostly as an office manager. In 1983 they were both trying to learn a peculiar form of dance which at the time was called 'Modern' (now called 'Standard') and which was pretty rare around Austin, Texas. They decided to practice together, but not get involved in any other way. In 1984 they decided that, as long as they were going to spend a lot of time shouting at each other, they might as well get married. So they did.

In 1992 they were in Houston taking lessons from their regular coach, Enrique Ramon, who along with his partner Gilbert Wenham organized the Texas Challenge dance competition. Ramon complained that it took him the better part of a week to heat the competition. Dick said that a computer program ought to be written to do that job faster and better. So he wrote one and called it COMPMNGR. Since he didn't have a clue about what he was doing the program didn't work very well, but it did work fast. Later Dick learned that Gilbert actually heated the competition, prevailed on Gilbert to explain how it should be done, and built the logic into COMPMNGR. That was the first of many, many, many upgrades.

In 1993 Brian and Sue Puttock, who organize the Nevada Star Ball, kindly offered to be the guinea pigs for COMPMNGR's first use. It quickly developed that COMPMNGR wouldn't do the job, since their competition had fourteen levels in the single dance category but COMPMNGR would only handle twelve. So Dick went back to the drawing board, and the Nevada Star Ball became the first competition to use COMPMNGR in August 1993. The second competition to use COMPMNGR was Susan Suchocki's New Jersey State Classic, in October 1993. The Douglasses went to both competitions and Dick worked his buns off patching COMPMNGR as necessary. In 1994 ten competitions used COMPMNGR, the Douglasses went to all of them, and Dick worked his buns off patching COMPMNGR as necessary. And so on. By 1997, when the Douglass's started to keep a business database, almost forty competitions used the program. By this time Dick's buns were pretty well worn out, so the Douglasses didn't go to all of them and that led to a new problem. When the Douglasses attended a competition it was on a barter basis, the organizers paid for hotel room and meals and didn't pay any additional fee. To arrive at an equitable way to charge a competition when they didn't attend the Douglasses came up with a formula for calculating a fee which was intended to be approximately what the organizer would pay for hotel room and meals had they attended. The same formula has been used since 1995. Non-profit and charitable competitions may use COMPMNGR for free. Now Dick mostly wears down what is left of his buns in his home office when customers make requests for changes and new features. And Brian Puttock continued to offer guidance and support until his death in 2014.

The first version of COMPMNGR was designed to run under Microsoft's DOS operating system. For those of you who care about such minutia, it was coded in Microsoft's PDS7 language, a sort of compiler BASIC. When Windows 95 arrived on the scene Dick started a new COMPMNGR version coded in Microsoft's C++. Version 2 was introduced in 1998. After an initial pretty rough burn-in period it evolved into a much better program than the first version. A lot of new features were requested by users. As more and more features were added the program became more and more clunky. In 1999 it became clear that the architecture of version 2 wasn't sufficiently modular to support all the new stuff being requested, so Dick started on a new design to make it easier to add features and to support file sharing over a network. It was coded in Microsoft C++ and used a database engine Dick designed specifically for COMPMNGR, after trying and rejecting a commercial database engine because it was too slow and too large. Version 3.00 was introduced in 2001.

In 2018 three hundred thirty six competitions registered to use COMPMNGR. These include most of the major competitions in the United States and Canada, but a number were overseas: Australia, Brazil, Austria, England, Italy, New Zealand, Croatia, South Africa, and Russia..

So what happens when the Douglasses are no longer around? We have every reason to believe that we'll be around for a good long time, but we wanted a plan to provide for our loyal customers just in case we aren't so lucky. So we made one.

Here is how the plan works. Immediately upon learning of our deaths the executors of Dick's estate (his two highly computer literate kids) will post two files on our www.compmngr.com web site and will send out a broadcast email advising our customers how to download the files. The first file is a small standalone computer program called RegisterEvent.exe, which allows you to create your own registration files. So you won't have to register with Douglass Associates and you won't have to pay a registration fee. You can read more about RegisterEvent and how to use it below. The second file is a ZIP file containing all the source code for COMPMNGR and its supporting programs. This file will only be of interest to those few users who want to continue COMPMNGR development and who either know C++ programming or or willing to hire a C++ programmer.

If Dick predeceases Elizabeth she will carry on the Douglass Associates operation just as she does now. If necessary she will hire programmers to modify COMPMNGR. When she dies or if she wishes to discontinue the operation the plan just described will be put into effect.

A screenshot of the RegisterEvent's only window is shown below. Most users will only be interest in the area below the line "---Data for creating registration file---" and extending down to the button labeled "Save RGC file", although the other areas are discussed below. Typically you will use RegisterEvent after you have set up a new competition by copying a previous one. For example, say you use COMPMNGR's built-in "make copy" feature to set up your 2009 competition by copying your MyComp2008 database to create the MyComp2009 database, which consists of two files, MyComp2009.rgc (the registration file) and MyComp2009.dbc (the main data file). At this point the MyComp2009.rgc file limits you to 750 entries, so you need to replace it with a version that allows you a larger number of entries. To do that you run the RegisterEvent program, enter the required information into the slots provided (including the root file name MyComp2009), and click the "Save RGC file button" at which time RegisterEvent overwrites the MyComp2009.rgc file with one that allows you a larger number of entries (which you specify) for the period of time between the effective date and the expiration date (which you specify). 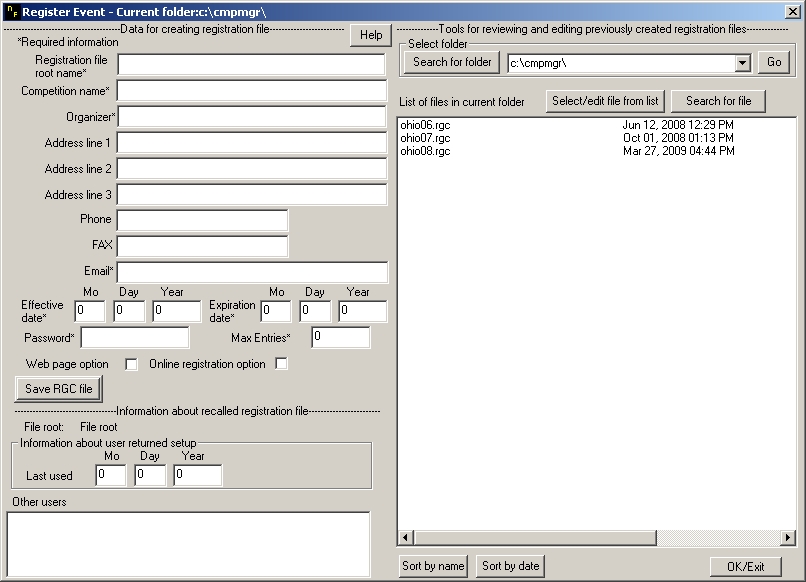